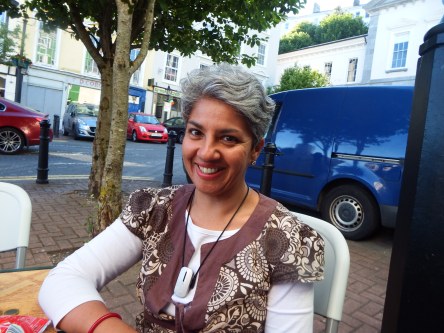 After a decade as a professional electrical engineer, Lina spent much of the following  17 years as a Yoga teacher, trainer of Yoga teachers and BACP Accredited psychotherapist. Her wide interests and variety of work roles are reflected in her fascination for study. Lina has a first degree in Engineering, a postgrad Diploma in Management Studies, an MA in Jungian Psychotherapy and Healing, and two qualifications in training and teaching. She is also a published writer and creates short films (under 3 minutes in duration) under her ‘SightBites’ YouTube Channel.

Born in Birmingham UK and brought up in a Bengali Brahmin and Tantric cultural background, Lina has learned to integrate an unusual breadth of understanding of Eastern and Western philosophies, cultures, history psychologies, science and health paradigms. She has learned to appreciate the true meaning of diversity.

Lina values learning through storytelling and the importance of oral history.

She was introduced to the wonders of rich imagery offered through the many tales her parents shared with her as a child. Growing up in 1970s Britain, these stories became a vital lifeline to knowing more about her own culture and extended family through her parents’ childhood memories in India (pre and post partition) . She learned about foreign lands, people, family, politics, religion, spirituality, the arts, history and more . . . all coming to life through the power of words (in both English and Bengali) and vivid descriptions weaved with such emotional richness to create these life-long tapestries.

This planted seeds in Lina’s rich fertile awareness and fed her curiosity about the importance of people, their lives, their story.

Today, Lina applies this same principle to the engaging talks and lectures she offers in variety of settings and including in her roles as :